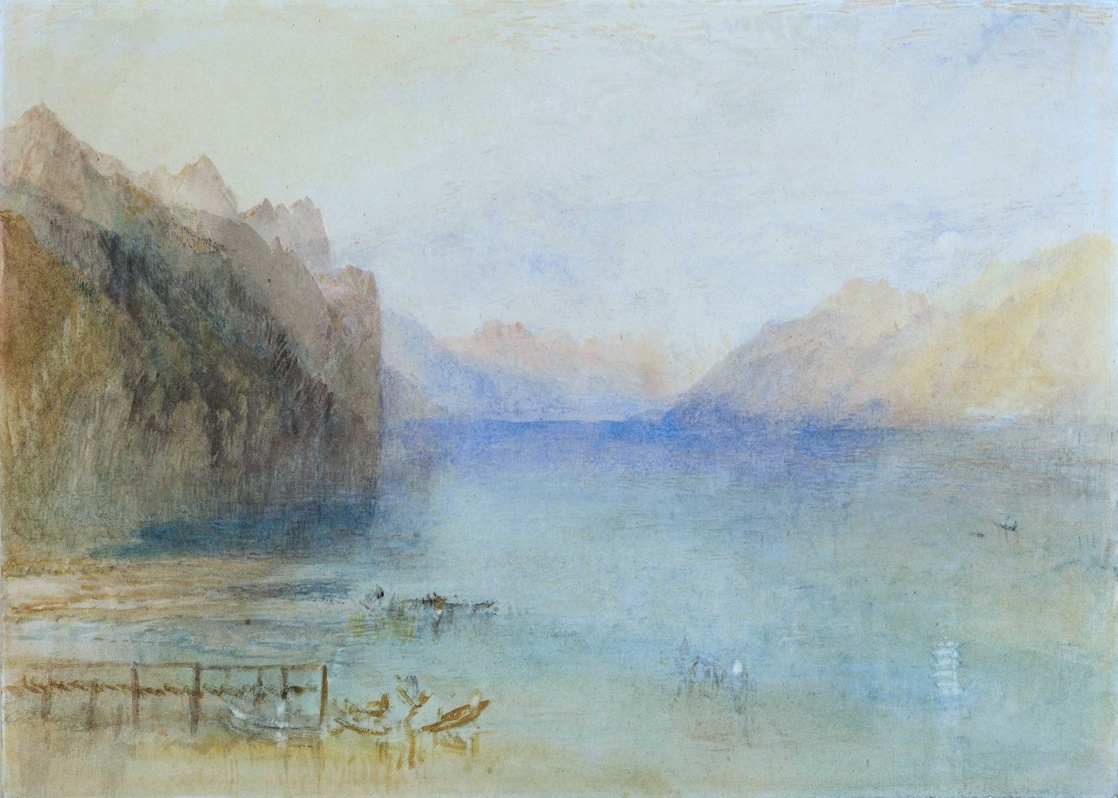 This view is taken at dusk looking west with the sun still bathing the distant mountains, the moon rising out of the clouds.  The steep cliffs dropping in to the water on the left, a characteristic of Lake Lucerne, are in shadow with just the peaks above them catching the last rays of sun.  In the foreground to the left, drawn by Turner in brief angular strokes is a jetty with five of the flat bottom boats which were numerous along the shore.  The lake near the viewpoint is all in shadow with blue and green washes interrupted just by the moon’s reflection.

It is most likely that this view is drawn from or near Brünnen, a spot favoured by Turner not least because it had good views in both directions of lake Lucerne.  If on the opposite bank to Brünnen, then the viewpoint may be at a small inn called Trieb ‘with a little haven in front, in which boats often take shelter’ (John Murray A Hand-Book for Travellers in Switzerland, Savoy and Piedmont, 1838, p.54). By Trieb is a rock called Wytenstein which when passed from the west, opens a view of the Bay of Uri which led Mackintosh to write ‘It is upon this that its superiority to all other lakes, or, as far as I know, scenes upon earth, depends’ (J. Murray, lt.op.cit,p.55).  Whether by Brünnen or opposite Brünnen, it is a view westward from that part of Lake Lucerne with the sun setting and the moon rising.

The view looks up to a narrow stretch of the lake, described in 1776 by Coxe as an ‘exceedingly narrow creek scarcely a mile across’, and the vertical cliffs on the south side are of the type observed on Lake Lucerne by Coxe as ‘perpendicular with forests of beech and pine growing down their sides to the very edge of the water, indeed the rocks are so entirely steep and overhanging, that it is with difficulty we could observe more than four or five spots, where we could have landed’ ( David Hill, Turner in the Alps,1992, p.128).

A further comparison to the Manchester watercolour shows that in both, Turner has chosen to focus upon moonlight and its reflection on the water.  The reflection of the moon in the present work is drawn with both scratching out and the application of white brushstrokes, the scratching made while the paper was still wet and subtle variations of colour made by brushstrokes once the paper has dried.  Combining this with stopping out, Turner has achieved an extraordinary subtle and beautiful evening view with the sun still bathing the mountains in the distance.

The size of the watercolour, indicates that this was a sheet from one of Turner’s roll sketchbooks, soft back books which it is said he would roll and carry in his deep pockets, therefore easily accessible for him when he needed to sketch.  It may have been a sample study, of which Turner made about twenty, which he drew for clients to peruse and choose for a final work.  Thomas Griffith, Turner’s agent, organised this and approached the main patrons such as Godfrey Windus, the Ruskins and H.A.J. Munro of Novar. Ruskin the young student who from meeting Turner in 1840, was becoming an ardent champion of him, recalled being shown fifteen sample sketches, while Windus appears to have been shown twenty.

The light from the hidden sunset, together with the translucent colour of still water, and the evident homecoming of the boat at the jetty, project an atmosphere of calm and silence, as was noted in 1776 by Coxe ‘the lake was as smooth as cristal and the silent, solemn gloom which reigned in this place was…. ..awful and affecting’ ((David Hill,lit.op.cit.,1992,p.128).