WOODED LANDSCAPE WITH FIGURES AND CATTLE AT A POOL 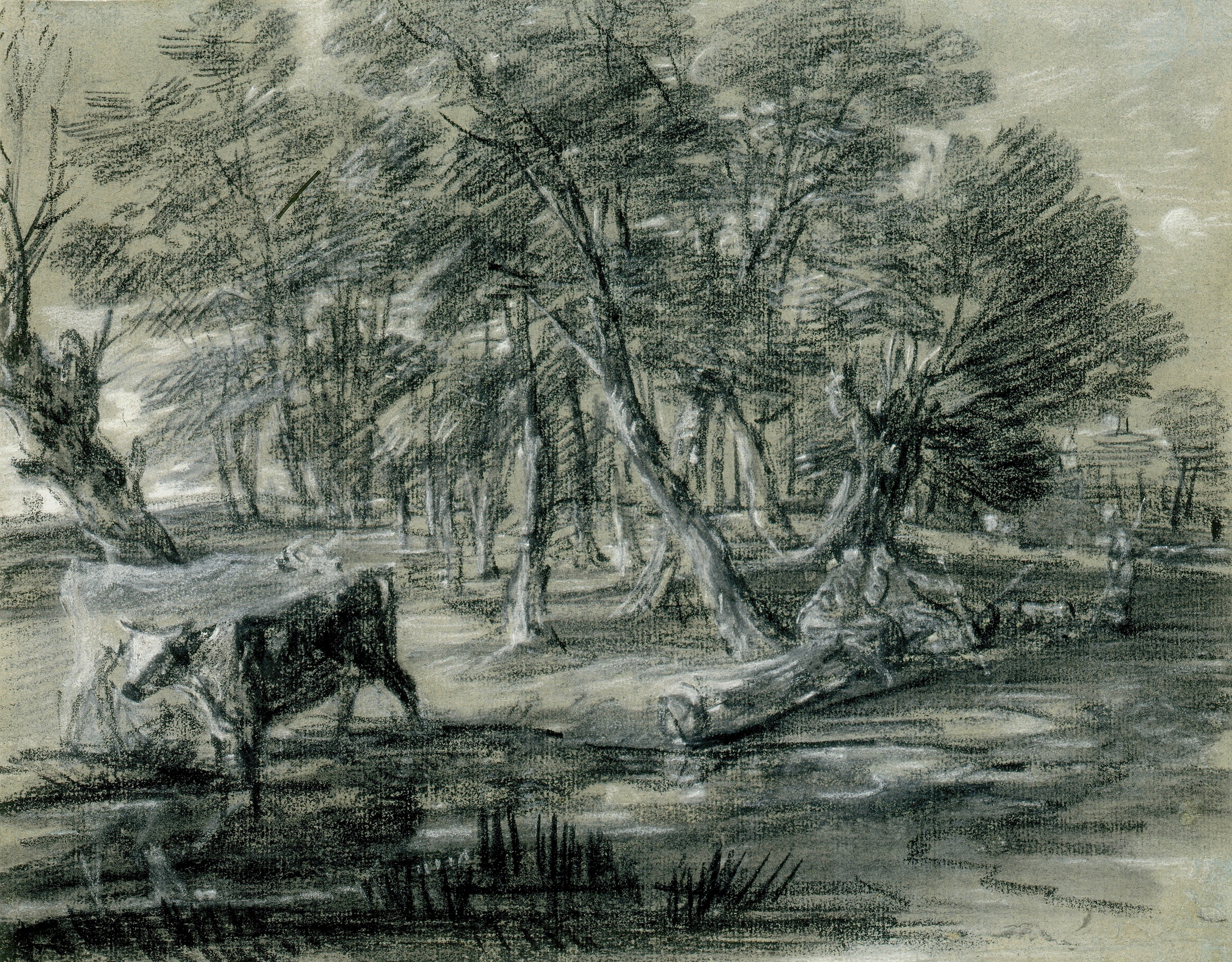 Black and white chalk with stump
9 5/8 x 12 ¼ inches (24.3 x 31.3 cm)
Engraved: In soft ground etching and aquatint by Gainsborough and published by J.&J. Boydell as no.4 in a series of twelve on 1 August 1797
Acquired by Gainsborough's House, Sudbury

In his lifelong exploration of idealised landscape in painting, drawing and printmaking, Gainsborough constantly returned to an established repertoire of motifs inspired by what he perceived as the enviable simplicities of rural life: herdsmen and their animals, travellers through the landscape, isolated cottages and their inhabitants, rustic lovers and peasants going to market. From such comparatively limited subject matter Gainsborough was able to create an apparently infinite number of variations in whichever medium he chose. It was only rarely that he included any overtly topographical element in his work, although he certainly admired Paul Sandby’s mastery of that genre.

By the late 1770s, when this drawing may be dated, Gainsborough had adopted the sketchy handling and tonal effects made possible by his use of monochromatic chalks and washes, a technique well suited to his rapid notation of ideas expressing the atmospheric and imaginative possibilities of landscape. In his Anecdotes of Painters (1808), Edward Edwards discussed Gainsborough’s development as a draughtsman, noting the ‘judicious attention to the minutiae of nature’ in his earliest drawings, when – as in his landscape paintings of the period – he was concerned with capturing specific detail, often studied from nature. Edwards went on to describe his mature drawing style, ‘where he adopted a very different manner, both of style and execution, the subjects being more romantic in their composition and their execution more indeterminate…He struck out a vast number of bold, free sketches of landscape and cattle, all of which have a most captivating effect to the eye of an artist, or connoisseur of real taste’. The present drawing aptly exemplifies Edwards’s description.

Although Gainsborough rarely made preparatory studies for his landscape paintings, this drawing was the model for his soft-ground etching and aquatint made c.1778 as the fourth in a series of twelve prints made during the 1770s and 1780s, but for some reason never issued in his lifetime; they were eventually published by John and Josiah Boydell in 1797. The copper plates for eleven of the subjects are now in Tate Britain. It is characteristic of Gainsborough’s interest in all techniques that he should have been an early experimenter with aquatint, the newest printmaking method of the day, involving the complex use of different acid-resistant resins, mixtures and varnishes and the repeated biting of the plate with acid. For him, it seems to have been important as a medium in its own right, not simply as a reproductive technique.

The translation of this drawing into a print shows how carefully Gainsborough considered the process. The foreground was simplified and made bolder in the print, in order to clarify the sense of spatial recession, and the composition as a whole tightened up, so that the trees and figures are more fully resolved. In the background, Gainsborough introduced a cottage, and emphasised the romantic, twilit atmosphere of the scene by highlighting the newly risen moon.