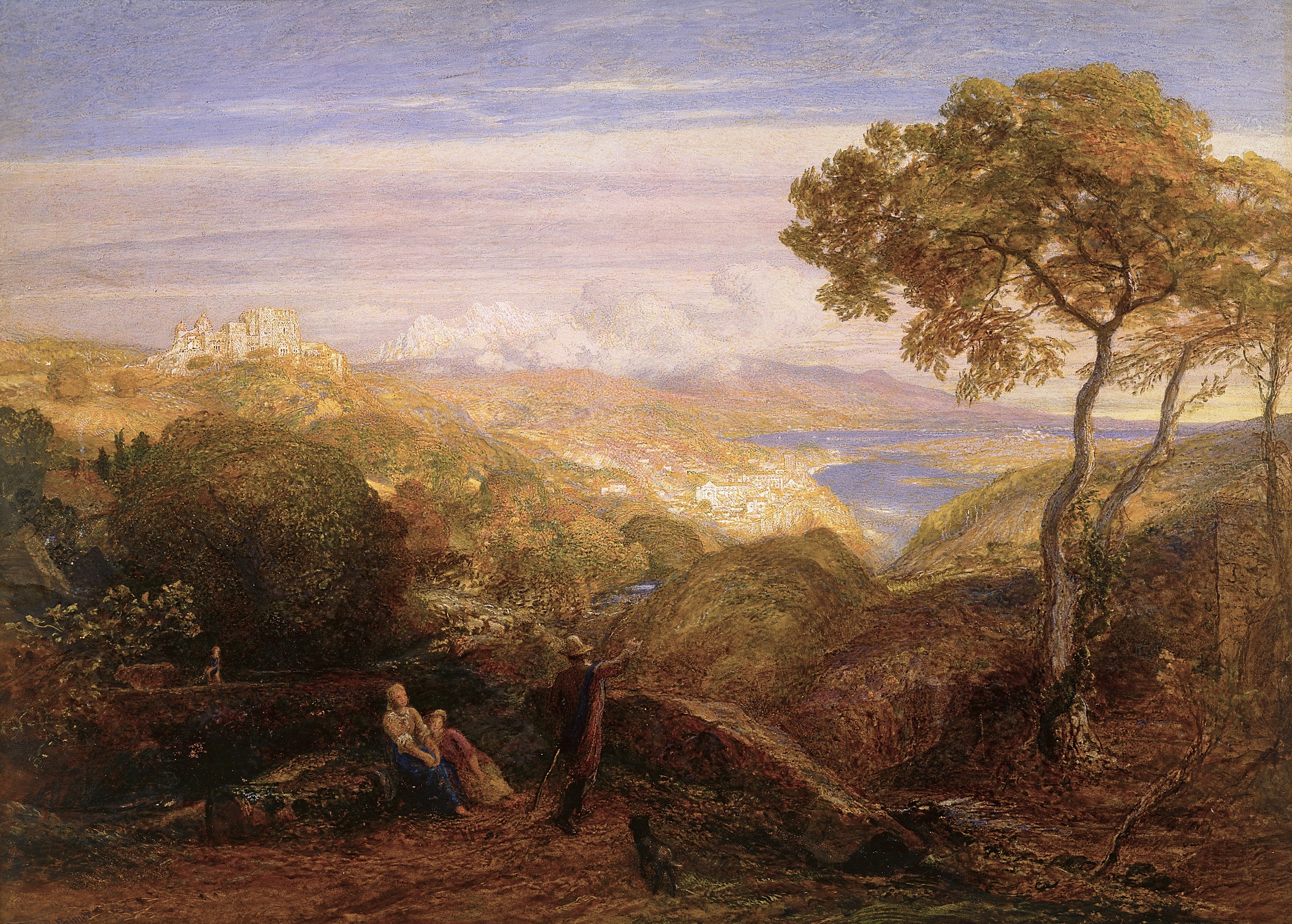 Fitzwilliam Museum, Cambridge, Samuel Palmer and the Ancients, 1984, no.61

The British Museum, London and The Metropolitan Museum, New York, 2005-06,

Samuel Palmer: Vision and Landscape, no.146

F.G. Stephens, Notes by Mr F.G. Stephens on a collection of Drawings, Paintings and Etchings by the late Samuel Palmer, 1881, p.19

R. Lister and G. Reynolds, Samuel Palmer: A Vision Recaptured: The Complete Etchings and the Paintings for Milton and Virgil, 1978, pp.41, 67;

Following the death of his beloved son Thomas More Palmer in 1861, Samuel Palmer's retreat to the suburban gentility of Furze Hill House, Redhill ('in the midst of what is to me the most emphatic solitude, a growing railway town'), prompted a new and more deeply meditative quality in his work. The later years of Palmer's life were dominated by two major projects, a set of watercolours inspired by Virgil's Eclogues, which he himself translated, and another cycle of watercolours illustrating Milton’s L’Allegro and Il Penseroso.

From his childhood, Milton had been Palmer’s favourite poet; throughout his life his work contained allusions to Milton, as did his letters, and he painted a number of watercolours on Miltonic themes. In 1853 Leonard Rowe Valpy, John Ruskin’s solicitor, who was himself a serious collector, bought a watercolour from Palmer at the winter exhibition of the Old Water-Colour Society. He asked for some minor alterations to be made to it, and in the course of correspondence asked Palmer if he had anything  ‘in hand which specially affected his “inner sympathies”’. Palmer replied that he had recently begun to think about a series illustrating L’Allegro and Il Penseroso, and between September 1864 and April 1865 Valpy and Palmer agreed on the subjects, for which he made a number of preliminary studies; in the end he painted eight large watercolours, all of which were exhibited at the Old Water-Colour Society as they were completed between 1868 and 1882, the year after his death, when The Bellman, which Palmer had considered unfinished, was shown. The commission for the Milton series was the greatest preoccupation of his last seventeen years, and as he wrote, he lavished on the watercolours ‘time without limit or measure, even after I myself considered the works complete’.

According to the plan for the series that Palmer devised with Valpy in 1864, The Prospect was to be the second subject illustrating a passage from L’Allegro:

Whilst the landscape round it measures

Where the nibbling flock do stray;

Mountains on whose barren breast

The labouring clouds do often rest;

Towers and battlements it sees

Where perhaps some beauty lies

The cynosure of neigh’bring eyes.

Palmer worked on The Prospect over a long period, devoting a good deal of time to devising a composition that would fully express the sense of Milton’s lines.

The Prospect was exhibited in 1881, together with The Eastern Gate, the first in the series, when both were widely praised, the critic F.G. Stephens describing them in The Athenaeum as ‘epoch-making pictures’. Others particularly admired Palmer’s treatment of natural phenomena – here, the light at dawn – which to many recalled Turner, as did his associations of such subjects with literary sources and with the tradition of classical landscape painting, most perfectly represented for Turner and Palmer by Claude. The Milton watercolours are rightly considered as among his greatest works, more deeply pondered, more reflective and more richly executed than the ecstatic, youthful visions of his Shoreham years.