Jerusalem from the House of Herod 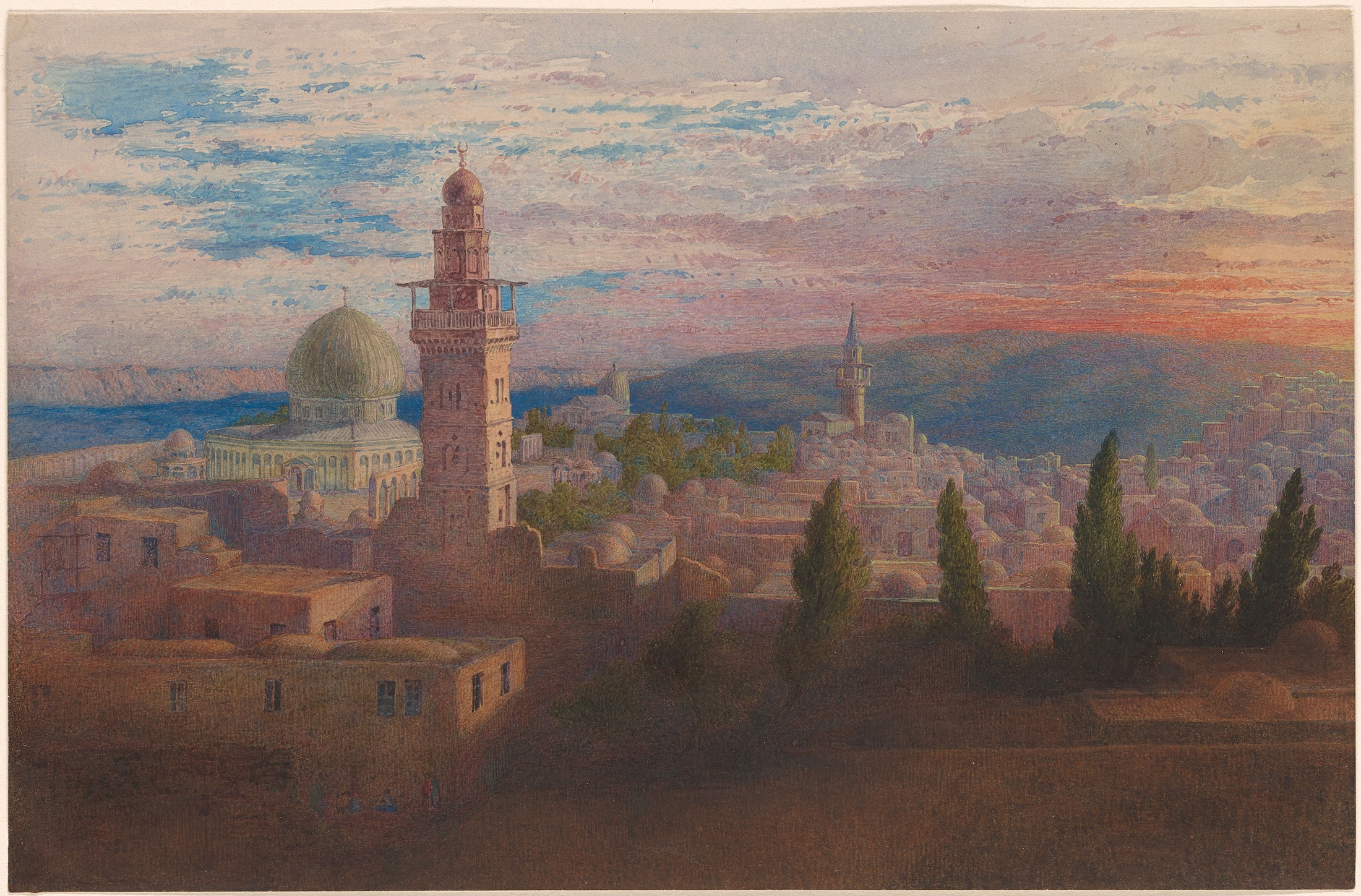 This radiant view of Jerusalem, bathed in warm light from the western sun, has been protected in an album for most if not all of its existence and has thus survived in pristine condition, making it one of the most exciting recent discoveries in Dadd’s oeuvre.  It is a rare example of his early work in this medium, and the depth and intensity of both the colour and the vision, so reminiscent of Palmer, may surprise anyone who is familiar only with some of the pale watercolours produced during his long incarceration in the colour-drained environment of Bethlem and Broadmoor Hospitals.  It would not however have surprised his contemporaries, who knew him as the most talented young artist of his generation, admiring the ‘power, fancy and judgement for which his works [are] eminent’, all of which qualities are magnificently exemplified here.

It is also rare for having been completed during Dadd’s tour of Europe and the Middle East with Sir Thomas Phillips in 1842/3, when the speed and inconvenience of travelling gave him little time for anything but pencil sketches.  It was in the final stages of this tour that he began to show symptoms of the catastrophic breakdown which was soon to overwhelm him, although he had already experienced passing episodes of mental disturbance, but with no outward signs, before reaching Jerusalem in November 1842, four months into the journey.  Three months after his return to England, already suffering from delusions that he was pursued by devils, he murdered his father in the belief that he had been ordered to do so by the Egyptian god Osiris, and spent the remaining 42 years of his life in confinement as a ‘criminal lunatic’.  Although he continued to use material gathered during this journey throughout his later work, there is a special poignancy in the knowledge that this exquisite watercolour must have been one of the last subjects that he would paint direct from nature, and as a free man.

Dadd and Phillips spent only two full days in Jerusalem, having set out for an excursion to the Jordan on the morning after their arrival, and leaving again three days after their return.  Whether or not Dadd did much sightseeing, as did Phillips, there were certainly no more than three evenings available for him to have studied the light for this picture, even if the conditions were right.  A small pencil drawing showing the identical view in some detail survives in his sketchbook, now in the Victoria & Albert Museum, but it contains neither colour notes nor any indication of the lighting effects needed to transform a highly competent topographical drawing into this most magical of sunsets.  In a letter to his mentor David Roberts RA, written earlier in the journey, Dadd described a sight which was ‘enough to make one leap out of one’s skin’ – a range of snow capped mountains in Turkey with ‘their bald summits glowing and gleaming in the setting sun’.  It could equally well have been a description of his own depiction of Jerusalem, which glows and gleams in the setting sun and is more than enough to make one leap out of one’s skin.

Whether by design or the accident of a restrictive timetable, he has not chosen the more distant vantage point of the Mount of Olives so beloved by painters and photographers, from which the view of Jerusalem is dominated and partly hidden by the Temple Mount, but one which looks south over the Mount past the Dome of the Rock to the El-Aqsa Mosque, and round to the west across the domed roofs of the old city, set against a backdrop of the Kidron Valley and the surrounding hills and mountains.  His note on the back of the picture, ’Jerusalem from the House of Herod’, is potentially misleading, but he is evidently referring to the location which was still at that time erroneously thought to be the site of Herod’s Palace, on high ground just north of the Via Dolorosa (the real site is elsewhere).   From here he has been able to look slightly down on a panoramic view of the town which dips away from Temple Mount and gently rises again to the west, and to use the massively built and heavily shadowed buildings in the foreground as a dramatic foil for his fairytale city which almost floats into the late evening sunlight beyond.  With an inspired touch, he has allowed the majestic Dome of the Rock to be dwarfed and literally sidelined by the sturdy presence of the Ghawanima Minaret which stands at the north west corner of Temple Mount, and here also stands on the boundary between light and shade and takes over as the focal point of the composition.

The only known watercolour by Dadd which is of comparable quality is the night scene The Halt in the Desert, now in the British Museum, which recalls an episode during the excursion from Jerusalem to Jericho.  Sadly, these two works seem to be the only remaining evidence of his visionary powers at their highest.