THE BAY OF NAPLES WITH THE TEMPLE OF VENUS 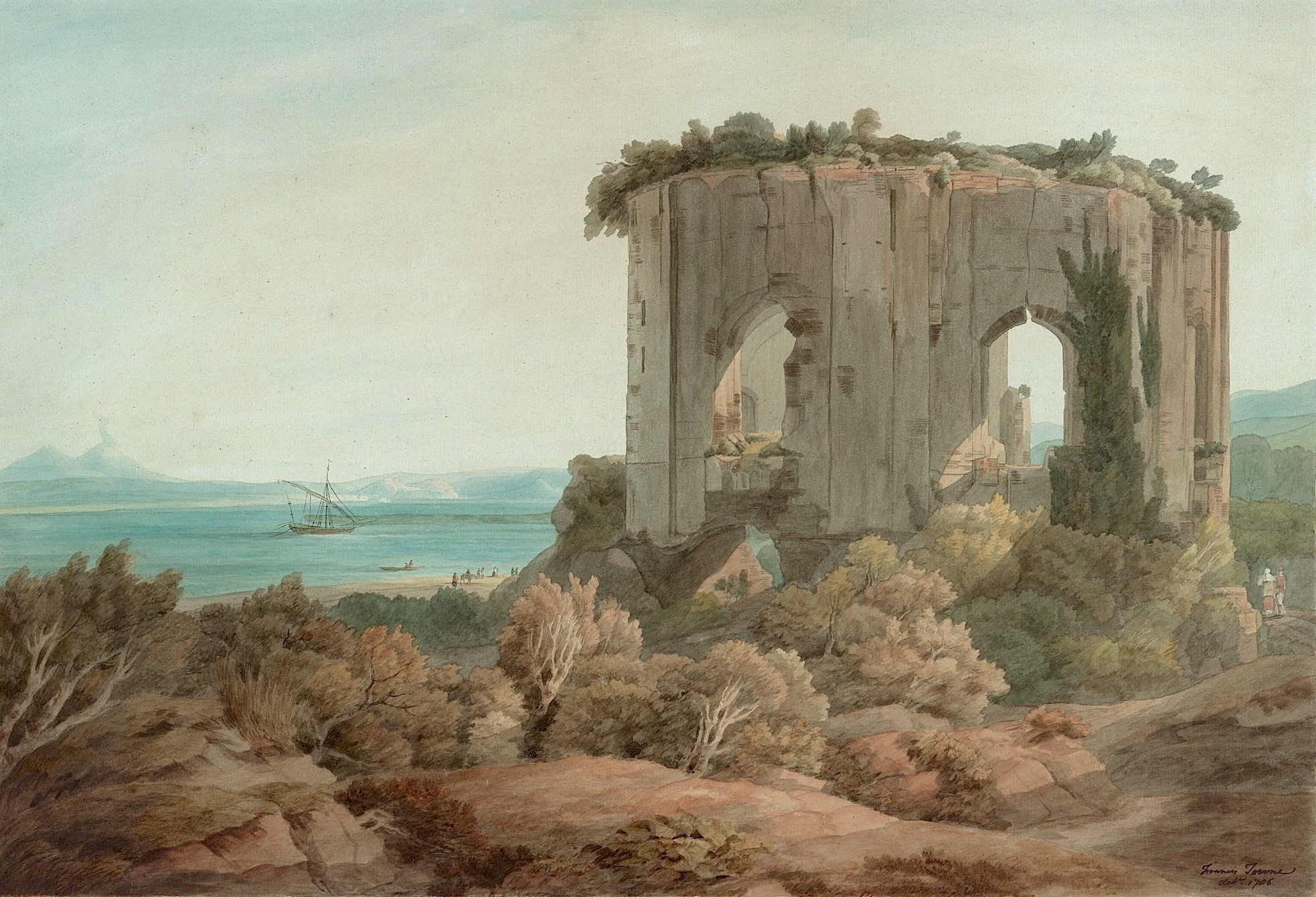 Watercolour over traces of graphite; laid down on original mount
13 ¼ x 19 ½ inches
Acquired by The Morgan Library & Museum, New York

Francis Towne’s distinctive style began to evolve in the 1770s, but it was not until his visit to Italy in 1780-1 – when he was already forty – that it found its fullest expression. His work was scarcely noticed in his own lifetime, yet his bold pen and ink drawings with their broad sweeps of watercolour now seem the poetic high-point of the eighteenth-century tradition of the tinted drawing. Towne arrived in Rome in October 1780. Although he did not keep a written journal as his old friend Thomas Jones did, his carefully annotated and dated watercolours form a visual record of his travels. He went on sketching trips with fellow British artists, in Rome and the Campagna with John ‘Warwick’ Smith and William Pars, and in Naples in the spring of 1781 with Thomas Jones, whose Memoirs record their adventures, including an encounter with brigands.

According to Jones, Francis Towne arrived in Naples on 8 March, where he stayed until 3 April; significantly, this was the first entry in his journal since the departure of William Pars for Rome on 15 November 1780 (he was to return to Naples in May 1781). Jones devoted himself to guiding Towne, taking pride in being able to ‘conduct him to many picturesque scenes of my Own discovery, entirely out of the common road of occasional Visiters, either Cavaliers or Artists, from Rome’. But the two also made expeditions to see the celebrated sights of the area. The imposing ruins of the so-called temples at Baia (ancient thermal establishments) were an essential destination on visitors’ Neapolitan itineraries, and a favourite haunt of Jones’s, who records many visits, including one when he and his friends dined in the Temple of Venus, and another with William Pars.

But undoubtedly the most hair-raising experience took place when he and Francis Towne visited the temples on 20 March 1781; this was the occasion when Towne made the dated sketch, now in the Graves Art Gallery, Sheffield, on which he later based the present watercolour, showing the ruined octagonal Temple from the north-west.  ‘In one of our Excursions, we met with an Adventure, which as it seemed likely to have proved fatal to one if not both of us, I can not help relating – It was Tuesday Ye 20th of March. We were on the Coast of Baja making Sketches of the Two Antique Temples there, and going into a little Wine house to refresh, took out of our pockets our cold fowl and ordered a flask of wine – This house or rather Hovel served as a place of Rendezvous for the idle Soldiers of the adjoining Garrison…to drink and gamble at – As we were just beginning our little repast, Two gigantic Troopers entered and sat down for some time without saying a word, but casting a scowling Eye alternately on us, and at one another – at length calling for a glass of wine, which was brought them, they began to rave at the Landlady for not bringing “Gentlemen Soldiers a drinking-glass – as well as those foreigners”, pointing to us – The Old Woman told them that she had but that one in the house – Upon which the leading man of the two seized our tumbler and put it on their Side of the Table – I was imprudent enough to take the glass, and without ceremony put it back again – Upon which the Savage got up, and seizing me by the Throat with one hand, thrust me up against the wall, and with the Other, drawing his broadsword, and holding the point of it at my gullet – Scoundrel, says he, Dost thou know what it is to affront a Soldier? (Birbone che sei, sai tu che cosa d’affrontare un Signore Soldato?) – Towne was almost frightened to death – The old woman screamed and beg’d of them fore the Holy Virgin’s sake not to kill the poor foreigners – that we had been often at her house and had behaved always very honorably both to her and the Gentlemen Soldiers -  for my part, I could neither speak or move, being almost throttled by the fellow’s gripe, which is the only reason I can give for my insensibility …to the imminent Danger I was in, the bare remembrance of which afterward made me Shudder – The tumbler glass however was immediately given up, and the fellow letting go his hold and muttering a few execrations, returned his Sword to the Scabbard again’. On his next visit, on 6 June, with his wife Maria and William Pars, they cautiously sketched the temples, ‘in despite of the neighbouring Soldiery’; Pars’s sketch, taken from virtually the same spot as Towne’s, later served as the basis for his watercolour now in Birmingham City Museum and Art Gallery (L. Stainton, In the Shadow of Vesuvius, 1990. pp.128-9).

On his return to England in 1781, Towne found only a few patrons wanting to commission finished watercolours from the studies he had made in Italy. This is one of several dated 1786, but we do not know who commissioned it. Unlike J.R. Cozens, neither Thomas Jones nor Francis Towne ever worked as the personal artist of a wealthy individual; irksome though Cozens found it to be at the beck and call of Richard Payne Knight or of William Beckford, such service did at least ensure a number of commissions as well as useful introductions. Towne somehow also managed to alienate his fellow artists, failing to be elected as an Associate of the Royal Academy no fewer than ten times. Yet he never ceased to believe in his talent, organising his own one-man exhibition in 1805, where he showed some two hundred watercolours, a venture that proved unsuccessful. His bequest to the British Museum of the greater number of the studies he had made in Italy in 1780-1 – the first such by an artist – suggests his sustained pride in his idiosyncratic style. It was not until around 1920 that Towne’s work was rediscovered; his watercolours are today among the most sought after and prized.