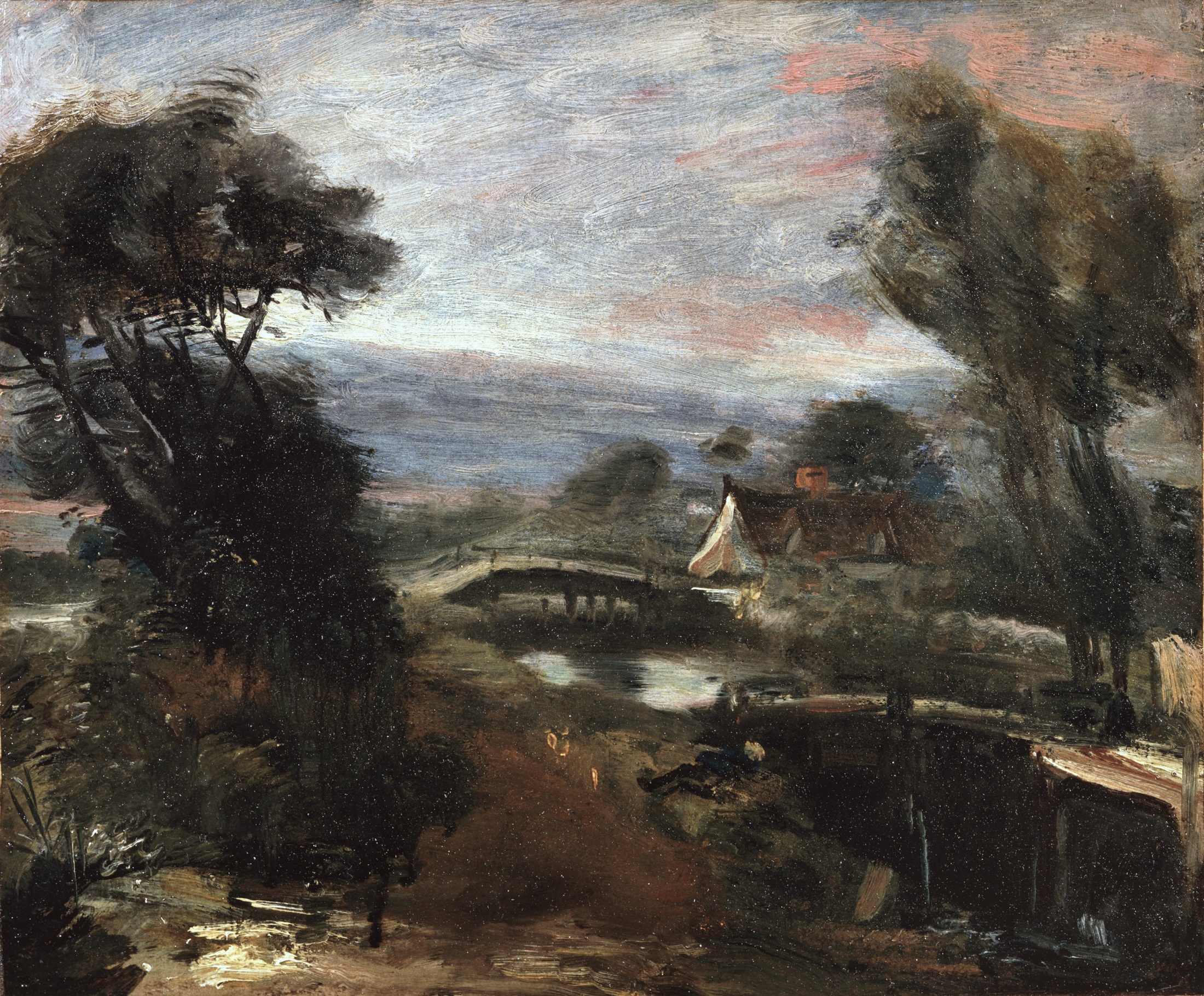 This remarkably vivid and spontaneous oil sketch relates to the evolution of one of John Constable’s important early Royal Academy exhibits, Landscape: boys fishing, 1813 (Anglesey Abbey, National Trust; shown in the mezzotint made after the picture in 1831 by David Lucas for English Landscape).  It was formerly unknown to Constable scholars, before 2000, having been for many years in private collections.

Unlike his great contemporary JMW Turner, Constable proved to be rather a slow starter as an artist. By 1812, however, around the time this and four other, related sketches for Landscape: boys fishing were painted, he was really beginning to get into his stride.  Whilst the picture he had shown at the Academy in 1811, Dedham Vale: morning (private collection) failed to receive any critical attention, his 1812 exhibit, Flatford Mill from the Lock (private collection), earned him considerable praise from his peers, notably from the Academy’s President, Benjamin West.  This encouraged Constable to select another subject set on the River Stour at Flatford for the following year’s submission, this time a view looking in the opposite direction, away from the Mill towards the footbridge with Bridge Cottage adjacent, the view indeed shown here.

Whilst Turner at this date was mainly painting historical landscapes – that is landscapes with classical, mythological or narrative themes – Constable by contrast was committed to painting the scenery in Suffolk where he had spent his boyhood years. Since about 1802 he had formed a resolution to paint landscape in a more honest and ‘truthful’ way. This meant not only painting scenes with which he was intimately familiar (and which held powerful personal associations for him), but also attempting to record them as far as possible on the spot. Thus Constable would return to East Bergholt each summer and spend long periods sketching, in pencil or in paints, in the open air. This practice was greatly facilitated by the fact that his father had acquired a cottage for him in the village which he could use both as a base for his sketching forays as well as a studio in which to paint.

Around this time, when planning a picture for exhibition at the Royal Academy – whether Dedham Vale: morning, 1811, Flatford Mill from the Lock, 1812, or Landscape: boys fishing, 1813 – Constable’s practice was to make a sequence of small preparatory sketches in oil. In this way he might experiment, for example, with the best angle from which to present his composition, how to frame it perhaps, or else how far to extend the panorama on either side. He might also try out the inclusion of different figurative elements. Above all he would use these preparatory sketches to work out the tonal balance of the composition and its lighting effects, even perhaps experimenting with the time of day.

When attempting to chart the evolution of these small preliminary oil sketches, it is usually helpful to assess them together, as a group, the better to work out their likely function and, thus, their probable order of execution. One also needs to consider which of them might have been painted in the open air and which in the studio.

The five known preliminary sketches in oil which relate to Landscape: boys fishing vary somewhat in their angles of presentation and fields of vision. However, their chief differences lie in their figurative components and lighting effects, some represented under the more even light of midday, others the more mellow, richer tones of sunset.

Three of the five sketches in the group, including A view on the Stour near Flatford Mill: sketch for ‘Landscape: Boys Fishing’ , show one (or two) boys leaning into the lock fishing – the figurative detail ultimately incorporated into the final picture where the boys were moved a little further upstream.