An Open Landscape With A Herdsman Driving Cows And Sheep 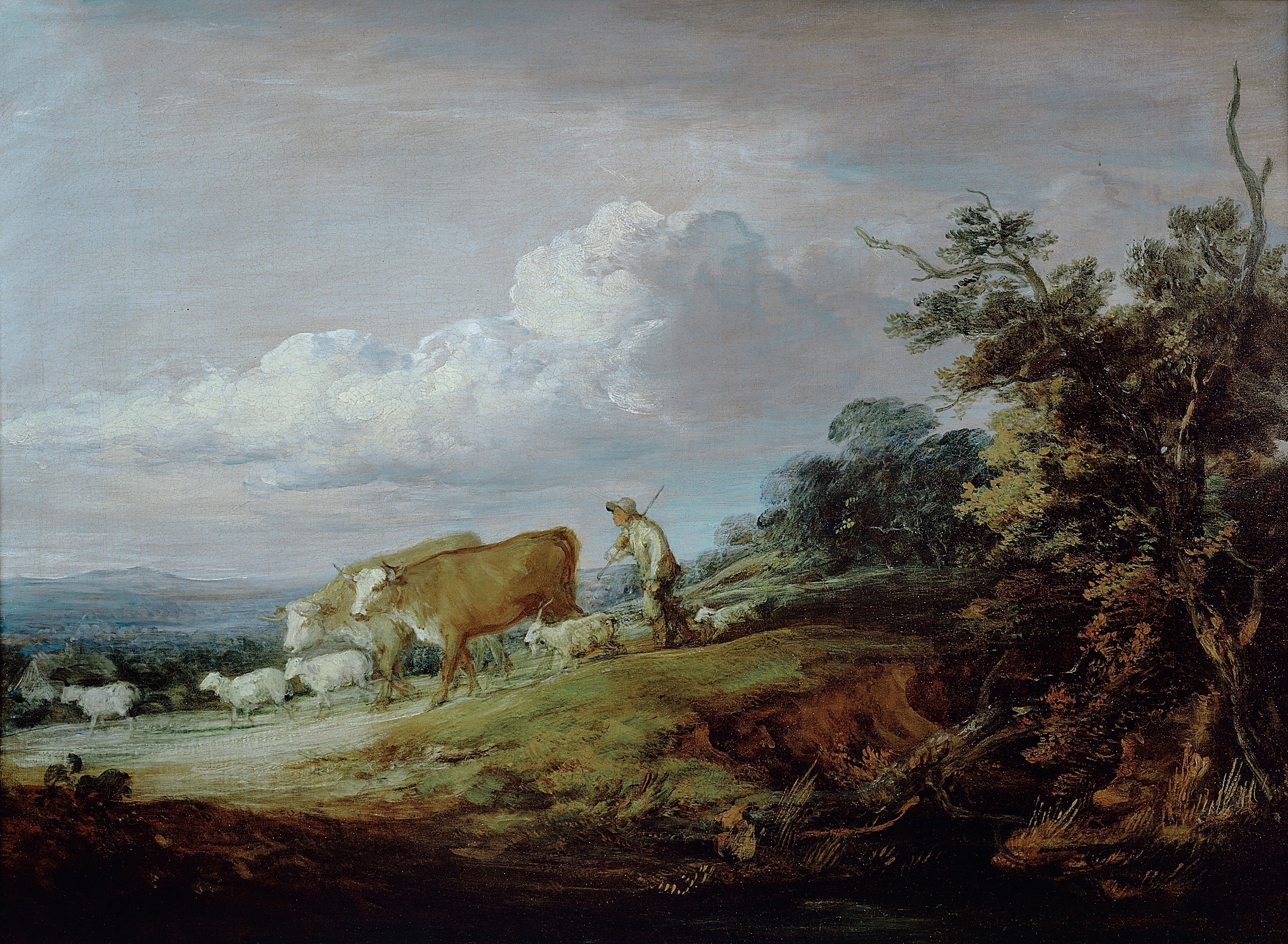 This landscape, painted two or three years before his death in 1788, demonstrates the power, beauty and monumentality of Gainsborough’s last pictures. It was in these years, as Reynolds eventually appreciated, that Gainsborough achieved a total and harmonious synthesis between the landscape of fact (as it might be called) and the landscape of the mind. These ‘landscapes of sentiment’ are amongst the most beautiful and important of European landscapes of their period and are now recognized as having been instrumental in forming a popular taste for the picturesque in the late Georgian England.

In the late 1780’s we find Gainsborough treating his favorite rural themes – themes that had preoccupied him from his earliest days in Suffolk – with a new broadness and confidence of manner, perhaps encouraged by the critical success that his landscapes had met with after the move to London in 1774. Walpole underlined Gainsborough’s popularity amongst the cognoscenti by describing his Royal Academy exhibit of that year ‘The Watering Place (National Gallery, London), as by far the finest landscape ever painted in England equal to the great masters’. Indeed, Gainsborough had been open to a number of potent influences in the years preceding the mid – 1790’s. An intensive study and appreciation of Rubens in the 1760’s was followed by a fresh study of the work of Claude, Dughet, and Ruisdael and to use Reynold’s words ‘what he thus learned, he applied to the originals of nature which he saw with his eyes; and imitated not in the manner of these masters, but in his own’. In his last works he appears also to have been influenced by Reynolds’s Annual Discourses to the students of the Royal Academy Schools towards painting in a somewhat ‘higher’ style. At the same time, however, his visit to the Lake District in 1783 seems to have confirmed in his own mind the rightness of his rather individual approach to landscape painting, although the scenery had little impact on his actual choice of subject matter.

The present canvas, painted at about the same time as his great statement of the period, ‘The Market Cart’ (Tate Galley, London), is a more intimate treatment of a theme that must always have reawakened memories of his earliest childhood in the wool town of Sudbury. Its handling and format can also be compared with another key picture of the period, the ‘Wooded Upland Landscape with a drover and pack horses’ (Elvehjem Art Center, Madison, Wisconsin, formerly Leger Galleries) which when exhibited at his studio by Gainsborough was described by his champion Bate – Dudley as one of seven views ‘the materials of which are in the utmost harmony of composition, and possessed of the highest touches of genius’. In its treatment and exploration of the potential richness, variety of colour, texture and vigor of the brushwork it can also be compared with the handling of the landscape elements in the major ‘mood’ portraits of the 1780’s such as those of ‘Lady Bate – Dudley’ (private collection, on loan to the Tate Gallery) and ‘Mrs. Sheridan’ (National Gallery of Art, Washington) where Gainsborough could be said to anticipate the work of the nineteenth–century masters such as Delacroix or Gericault. Gainsborough developed his treatment of the light in his final years to an extraordinary degree of sophistication and this may be due in part to his experiments in painting glass transparencies for his light–box (Victoria and Albert Museum).

In the work of the mid 1780’s, we find a movement away from the powerful rhythmical landscapes of the 1770’s and the early 1780’s, a style perhaps best demonstrated in the ‘Camden’ drawing of circa 1783, to a more evocative and nervous treatment which heralded a growing sensitivity in the modulation of effects and a wider ranging power of expressiveness within a restricted though highly individual palette. Reynolds, his arch–rival and sometime fervent admirer, fully appreciated this, and with characteristic generosity praised Gainsborough’s landscapes in Discourse XIV, delivered only a few months after his death and as such worth quoting at length: ‘It is certain, that all those odd scratches and marks , which on a close examination, are so observable in Gainsborough’s pictures, and which even to experienced painters appear rather the effect of accident than design; this chaos, this uncouth and shapeless appearance, by a kind of magic, at a certain distance assumes form, and all these parts seem to drop into their proper places; so that we can hardly refuse acknowledging the full effect of diligence, under the appearance of chance and hasty negligence. That Gainsborough himself considered this peculiarity in his manner and the power it possesses of exciting surprise, as a beauty in his works, I think may be inferred from the eager desire which we know he always expressed, that his pictures, at the exhibition, should be seen near, as well as at a distance’.

‘The slightness which we see in his best works cannot always be imputed to negligence. However, they may appear to superficial observers, painters know very well that a steady attention to the general effect takes up more time, and is more laborious to the mind, than any mode of high finishing or smoothness, without such attention. His handling, the manner of leaving the colours, or in other words, the methods he used for producing the effect, had very much the appearance of the works and regular practice belonging to the art; but still, like a man of strong intuition and perception of what was required, he found out a way of his own to accomplish his purpose.’

The present painting is closely related to a drawing that is evidently a preliminary idea for this composition (Staatliche Museen, Berlin). The Berlin drawing, which closely resembles the mixed–media study of cattle of the early 1780’s, differs from the painting in a number of details: in the finished picture an additional sheep has been included, the two rear – most cows have been replaced by a goat and a dog accompanies the drover. Elements of the landscape have also been changed. This is typical of Gainsborough’s creative process in that the final composition has taken form from a previous idea rather than being slavishly copied from an earlier drawing or study.

The early history of this landscape is unknown as Gainsborough seems to have sold few of his landscapes during his lifetime, but it is likely that his widow Margaret sold it to Joseph Smith, private secretary to William Pitt, who owned it by the time of the important Gainsborough exhibition at the British Institution. It was sold privately to Sir Edward Guinness, in whose family it remained until 1990.