Study for the Portrait of Ann Ford, Mrs Philip Thicknesse 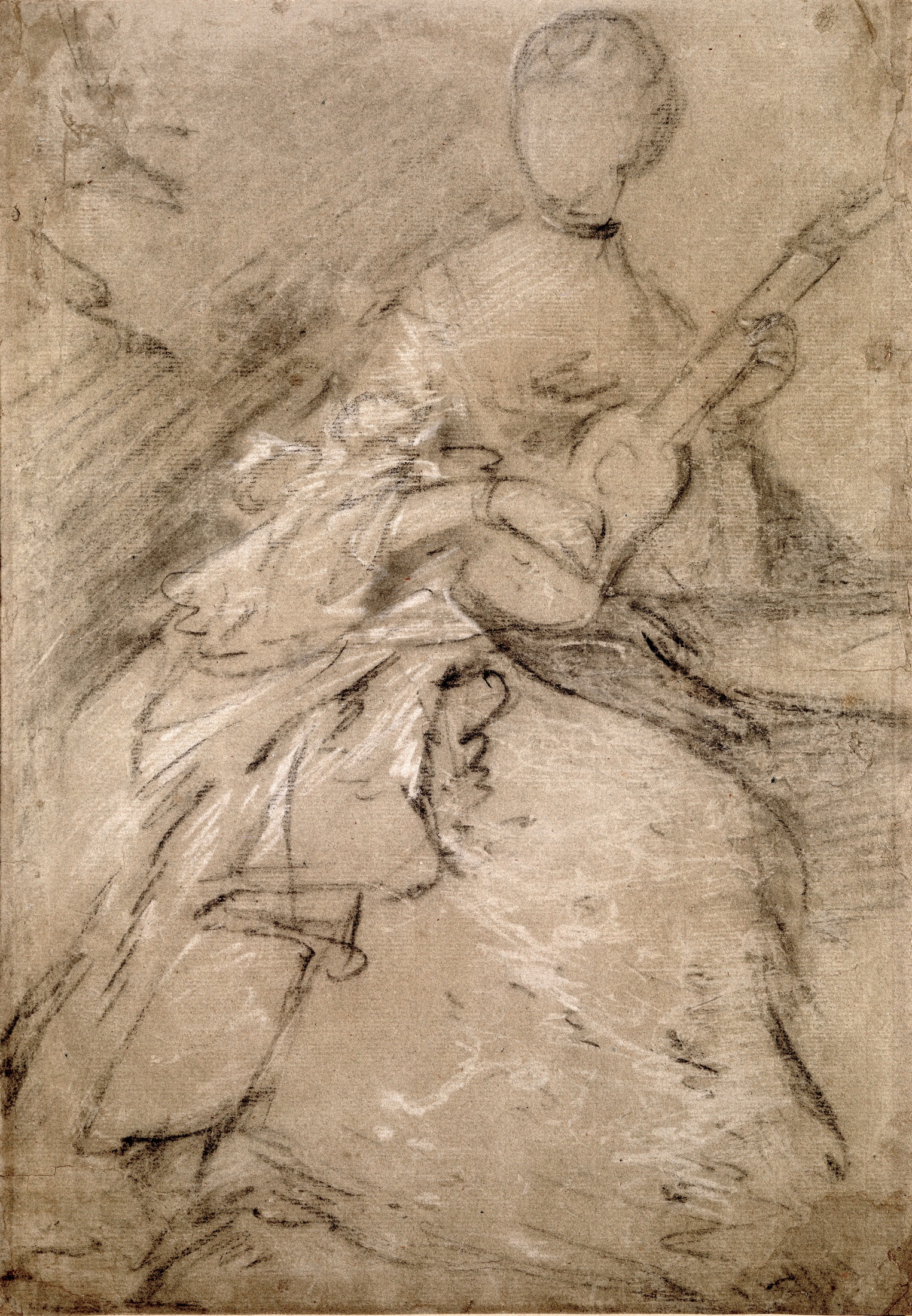 In the summer of 1760, Gainsborough took a lease on a handsome and well-placed house in the heart of the city of Bath, yards from the Abbey and the Pump Room. Here, besides his painting room, he adopted the practice of other fashionable artists and decided to have an exhibition room open to the public, where his latest work could be readily admired. Compared with the modest way in which he had conducted himself in Ipswich, Gainsborough was now preparing to project a very different image. What he needed was a spectacular portrait of someone in the public eye, so that no one could remain unaware of his presence in the city. For the first time he had the opportunity to reveal himself as a painter worthy of comparison with the most admired artists of the day, including Reynolds.

Gainsborough had probably met Miss Ford during his first visit to Bath, since she was already part of Lord Jersey’s circle; he cannot have failed to recognise her potential as a sitter, for she was creating a sensation in the city. A virtuoso on the guitar, the viola da gamba and the musical glasses, as well as a fine singer, she was a bold and determined character (in November 1758, Sir Charles Hanbury-Williams wrote that he thought her ‘Mad with Vanity and Pride’), well aware of her own talent, but allowed by her father to perform only at private gatherings: to appear in public would be considered scandalous. Ann Ford, however, was determined to do so, and advertised subscription concerts in London in March and April 1760 and October 1761.

The Earl of Jersey had become besotted by her: as a friend of his wrote, ‘She has a glorious voice…you would be desperately in love with her in half an hour’, and went so far as to offer her £800 per annum if she would desist from her plan. This would have compromised her virtue, and she declined. She went ahead with her first concert – which Lord Jersey attempted to sabotage – and came out if it with £1500. Perhaps fired by the Earl’s calculated snub, she wrote, and in 1761, published A Letter from Miss F—d to a Person of Distinction, in which she detailed her maltreatment at the hands of the Earl. She could not accept that it was better to be the object of an ageing man’s lecherous attention than risk public ridicule: ‘I have the satisfaction to find many sensible people of the opinion, that a young woman may sing in public…with virtue and innocence’. His response was to publish his own A Letter to Miss F—d, suggesting that she had stepped so far from the boundaries of the feminine as to defy propriety, duly provoking a second edition of her pamphlet. The public loved the scandal. As Gainsborough later put it, her bravado made her ‘partly admired & partly laugh’d at at every Tea Table’.

This was the context in which Gainsborough painted her portrait, a likeness that is the pictorial counterpart of her turbulent life at this time. Philip Thicknesse, who was subsequently to become her husband, urged her to sit to him. An indication of the importance he attached to this painting, one of his first full lengths, is the existence of two preparatory studies; as he became more confident in this format, he tended to outline the figure onto the canvas and paint directly. In this, the earlier of the two, which was unknown until recently, he establishes the basic pose, studies the fall of her elaborate ivory silk dress, and – significantly – shows her actually playing the guitar: had Gainsborough translated this into the painting, it would undoubtedly have compounded the scandal attaching to Miss Ford by representing her in the act of performing. In the second study (a much less pleasing drawing) she is shown in the pose Gainsborough was to use for the picture, holding – but not playing – an English guitar. Importantly, she is very clearly shown in a domestic and thus uncompromising setting, a wooded landscape painting on the wall, a cat by her feet. What is consistent from the outset, however, is her strikingly assertive pose, one leg crossed over the other in a manner that contravened contemporary ideas of female decorum, and underlined Ann Ford’s disdain of convention. Gainsborough, however, as Michael Rosenthal has shown, must have had two prototypes in mind, for the angle of the body and the crossing of the legs echoes Roubiliac’s superb and celebrated statue of George Frideric Handel from Vauxhall Gardens, 1738, while the pose also recalls Hogarth’s The Lady’s Last Stake (Buffalo, Albright-Knox Art Gallery), which had been one of the artistic sensations of 1759. Both Hogarth and Gainsborough deal with choices to be made by women: in The Lady’s Last Stake a virtuous married woman is faced with the dilemma of whether to succumb to the blandishments of the young officer to whom she has lost at cards, while Gainsborough’s Miss Ford, shown as an independently minded person, is faced with the dilemma of what constitutes acceptable conduct.

In the final painting, on display in his exhibition room by October 1760, Gainsborough made an important change to the composition established in the drawings, adding her viola da gamba in the background, an instrument perceived as one to be played only by men. The portrait, certainly his most ambitious to date, is characterised by paradox: we are given both an intimate glance of this controversial woman, yet kept at a distance not only through her air of dignity and refinement, in her shimmering, virginal, Van Dyck-like dress, but through the low viewpoint, so that we literally look up at her. Her bold pose and her decision to be shown with her instruments emphasises the tensions contained within the composition.

Almost immediately, the painting caused a stir, shocking some, but unquestionably advertising Gainsborough’s abilities. When he later sent the portrait to Philip Thicknesse in London, he noted that ‘it has done me great service’. (It may be that Ann Ford met her match with Thicknesse, memorably, if somewhat unfairly, described as an exceptionally unpleasant man, by nature a blackmailer, a lecher and a sadist, and certainly an eccentric.) This painting shows how rapidly Gainsborough was able to combine old master techniques and colour with an instinctive understanding of contemporary concepts of taste, and was beginning to define himself by his powers of invention and sheer virtuosity, turning away from provincial modesty to enrich his art from the example of Van Dyck and Rubens for a sophisticated metropolitan audience.