Portrait of the Duchess of Bedford 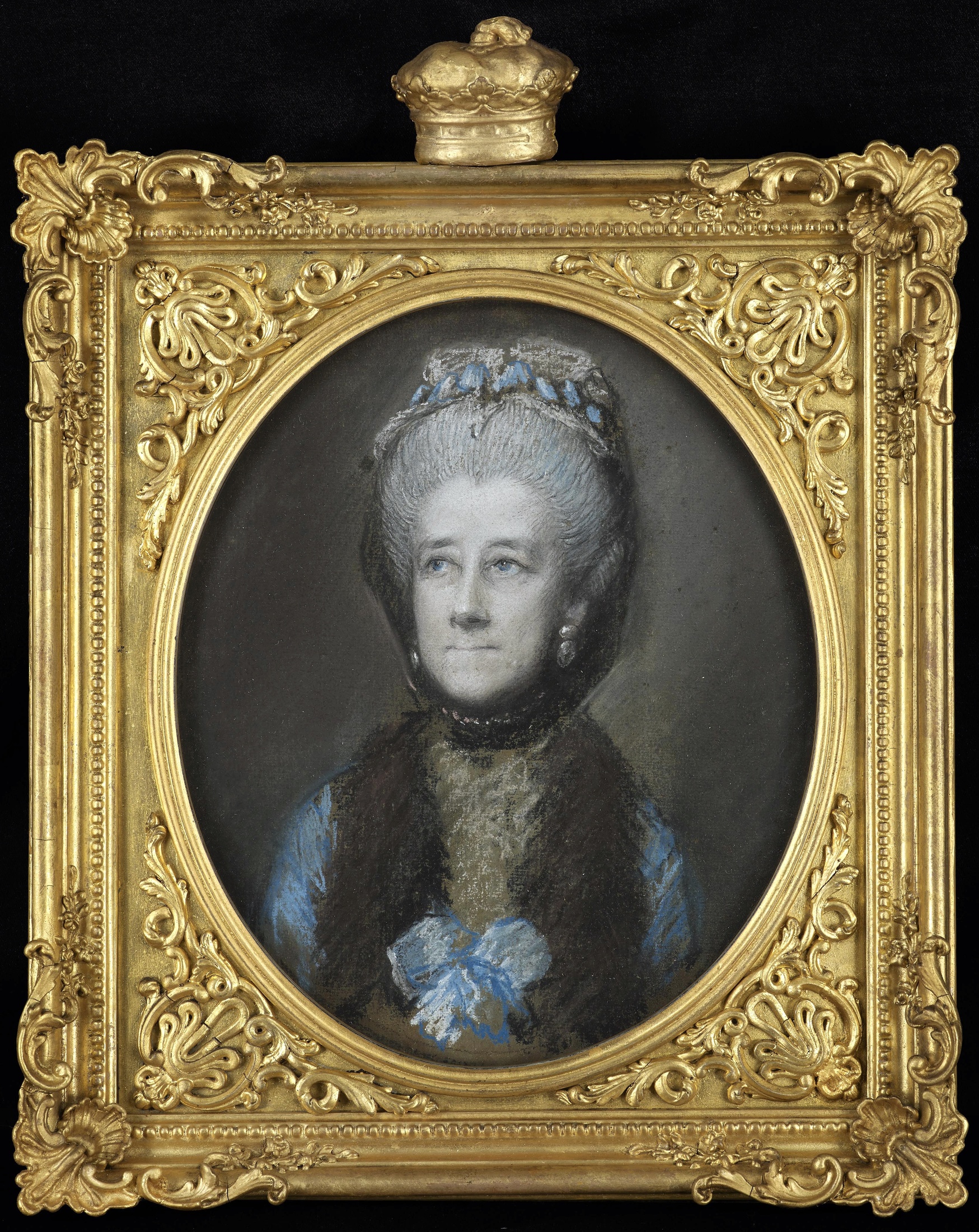 There are very few pastel portraits by Gainsborough and the oval of Duchess Gertrude is amongst the most vivacious. It is in exceptional condition and shows Gainsborough’s confidence in minimising the detail of the costume in order to emphasis the sympathetic detailing of the head. The colours are restricted to blue, white and brown and the lightening technique uses the grey tones of the paper to provide half tones in the composition. The precision and confidence of the handling is shown in the speed of the execution. It is one of only eleven record pastels by the artist the majority of which were made in the late 1760s when Gainsborough was working in Bath.

Like his landscape drawings it is generally assumed that the artist never sold his pastel portraits. It has been suggested that he either drew them for his own amusement — the drawing of his friend, the Revd Richard Graves, his wife and a man perhaps a servant are good examples1— or he drew them to curry favour with some of his grandest clients. Those of the Earl and Countess of Dartmouth were probably drawn as an apology for the frank exchanges between Dartmouth and the artist that were aired in a series of letters in 17712 and other pastels ofLord Rivers, the Duke of Montagu and the Duchess of Buccleuch must have been drawn as a favour and in the hopeful anticipation of winning future commissions.3 However, the two exquisite pastels of the Duchess of Bedford and her daughter the Duchess of Marlborough may be exceptions. Both drawings date from about 1767.

For over a decade John, 4th Duke of Bedford had been one of Gainsborough’s most important clients. In 1755 he commissioned two landscapes both intended asovermantels for Bedford House or Woburn Abbey and during the 1760s he commissioned a number of portraits of himself and pendant portraits of the Duke and Duchess are documented 1765.4 In 1767 the artist received a further commission to paint the Bedford’s only daughter, Caroline, and two letters detailing alterations to the composition and the delivery of the finished canvas have been published recently.5 Duchess Gertrude had been assiduous in finding appropriate marriages for her only daughter and her nieces whom she had raised at Woburn. She was delighted that Caroline married George, 4th Duke of Marlborough on 23 August 1762 at Bedford House in Bloomsbury although her new husband found her overbearing and he is reported as regarding his mother-in-law with ‘vast repugnance’ and banning her from Blenheim.6

George Marlborough had inherited Blenheim from his father in 1758 and he had begun to refurbish the house with the help of Sir William Chambers. He ordered furniture from Mayhew and Ince, commissioned Lancelot ‘Capability’ Brown to make one of his most memorable landscapes and arranged portrait sittings to Sir Joshua Reynolds and later to George Romney. Reynolds had already painted a portrait of his wife, Caroline, with their baby daughter in 1763/64 and the close association with the artist culminated in the great group portrait of the Marlborough family of 1778.7 In addition to the portrait of Caroline, Duchess Gertrude also commissioned a triple portrait of her grandchildren, Caroline, Elizabeth and George Spencer-Churchill, now lost, which was delivered to Bedford House at the same time as the portrait of their mother. This group portrait is only know from the letter of 1767. In addition to the pastel portrait of the Duchess of Bedford Gainsborough also drew a larger, ravishing study of her daughter. The documentation does not state that the two drawings were commissioned but they must have been drawn to send to Blenheim in an attempt to compensate for the Duke of Marlborough’s attitude and in the hope of maintaining some level of contact between mother and daughter. If it were an attempt by Gainsborough to win future commissions he was unsuccessful and it seems more likely that the decision to send such a gift would have been initiated by the Duchess of Bedford rather than the artist.