Venice: The New Moon – The Dogana from the steps of The Hotel Europa 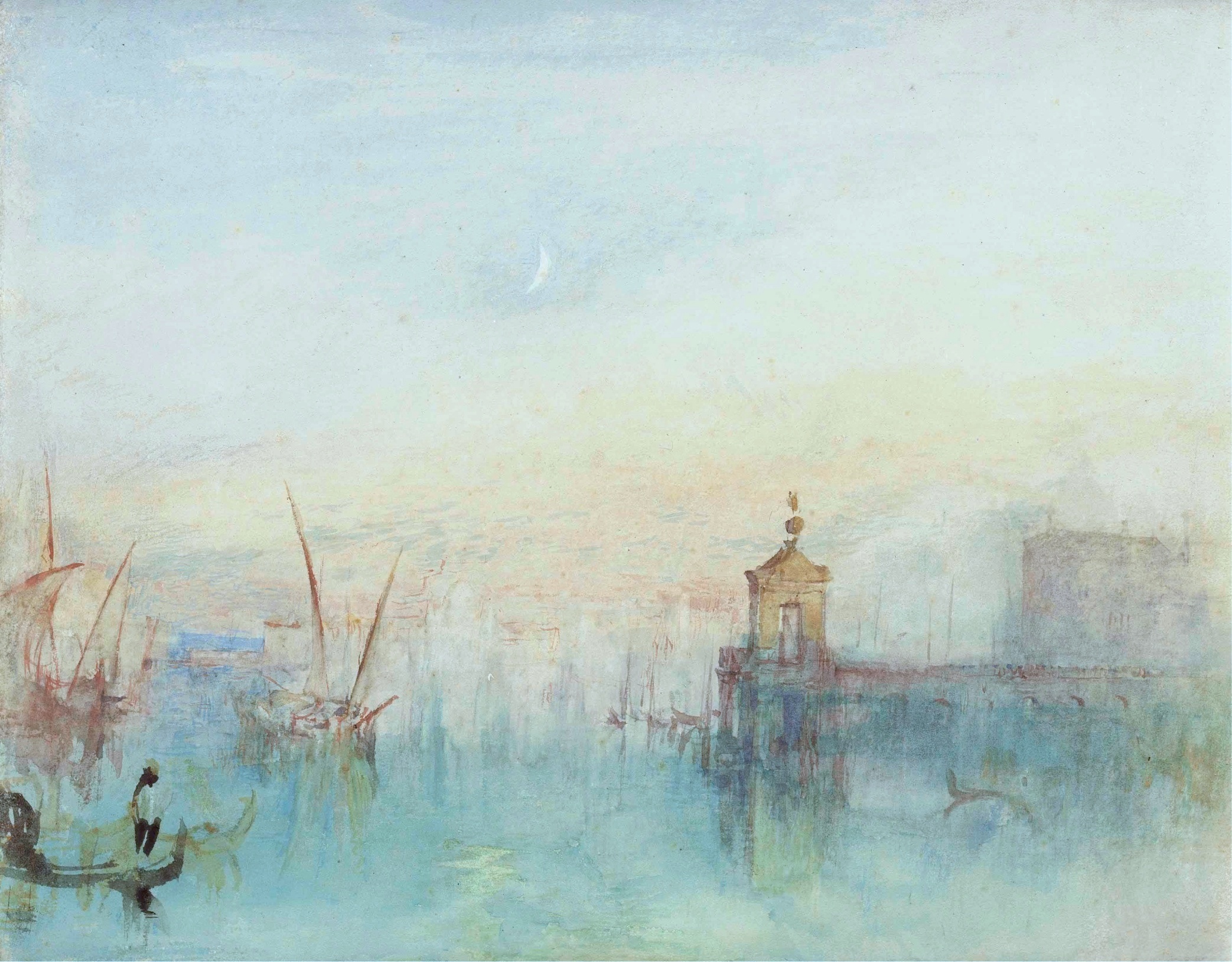 Unlike Turner's late views of Switzerland, he made no views of Venice that he would have regarded as finished works. As a result the majority of the some 150 watercolours produced during or after his last visit in 1840, of which this is a particularly ethereal and atmospheric example, remained in his possession and now form part of the Turner Bequest housed at Tate Britain. Very few went to private individuals, some, like this work, went to his dealer Thomas Griffith, perhaps to be used as an example of a composition that could be worked up on demand to form a finished work, as happened in the case of many of the Swiss views.

The Dogana or Customs House is one of the most prominent buildings in Venice and, not surprisingly, appears in a large number of Turner's oils, watercolours and drawings. The view across the mouth of the Grand Canal, including the façade of the Zitelle on the Giudecca and, often, the island and church of San Giorgio, is a standard one, also painted by Canaletto and Guardi. Turner depicted it in works dating from all three of his visits to Venice in 1819, 1833 and 1840 and made it his own.

Turner's representations of this view culminate in the oil painting exhibited at the Royal Academy in 1842 of The Dogana, San Giorgio, Citella from the Steps of the Europa, (M. Butlin and E. Joll, The Paintings of J.M.W. Turner, 1977, pl. 365; 1984, ed, pl. 400 and Warrell, op. cit. pl. 220). Turner had stayed at the Hotel Europa in 1833 and 1840 so his knowledge of the view is not surprising; the present watercolour, which leaves out San Giorgio, may have acted as a basis for the oil but this is hardly necessary particularly as the composition goes back to two works of 1819. What the two works have in common however, is the presence of the new moon which gives the evening light its particular character.

Two works from 1819 which both omit San Giorgio are a pencil drawing in the Milan to Venice sketchbook (Tate Britain, Turner Bequest CLXXV-40, illustrated Finberg, op. cit., pl. 2) and one of the four watercolours of Venice from the Como and Venice sketchbook. The latter lacks any pencil underdrawing and may be an unusual instance of Turner painting a watercolour on the spot. Unlike both the present watercolour and the oil painting, it distinguishes between the stone of the point of the Dogana and the warm reddish brick of the wall to the right. Indeed as Finberg writes of this and similar Venetian watercolours, 'The range of colour is adversely limited. Little more than red, yellow and blue are used, and these are distilled to the faintest possible tints. But each watercolour is used in its utmost purity; there is no mixing of one with the other before they are put on paper... There is no attempt to match the local colour of any object which is represented. The colour is not imitative nor representational. It is absolute colour chosen and used as a poetical medium.' (op. cit., p. 135).

At this time the Europa was still the private Palazzo Giustiniani and Turner would probably have had to make his drawing from the steps leading down to the Grand Canal adjacent to the palace. By the time of Turner's second visit to Venice in 1833, the building had become the Hotel Europa and it was again from the steps in front that Turner drew the small pencil sketch of the Dogana seen across the mouth of the Grand Canal with gondolas in the foreground on page 80 verso of the Vienna up to Venice sketchbook (Tate Britain, TB CCCXI ff. 80v ; illustrated Warrell, op. cit., pl. 83).

The present watercolour was almost certainly executed either back in the Hotel Europa or possibly once Turner had returned to London, as certain details on the right differ from those in the other versions of the composition. The technique is far removed from the fat work of the 1819 watercolour; subtle atmospheric washes are broken up by suggestions of details made with the point of a brush and there is an amazing use of fatly applied black to suggest the gondola on the left. The pink that suffuses the sky was probably applied in a band across the paper before any more detailed forms were added. Ian Warrell (loc. cit.) suggests that the Dogana itself is drawn in a different perspective from that of the left hand side of the composition, but that may be merely the result of the baroque form of the cupola distorting the receding horizontal band on the left. Much more than in the other versions of the composition the Dogana dominates the scene, perhaps as a reflection of the importance of its function as a tax office in the dominant commercial trade of the city. With its Doric façade by Giuseppe Benoni and turret surmounted by a golden ball and weather-vane, it remained in use as the customs house of Venice until early in the 21st Century, it is now an art museum.