STUDY OF A FEMALE NUDE 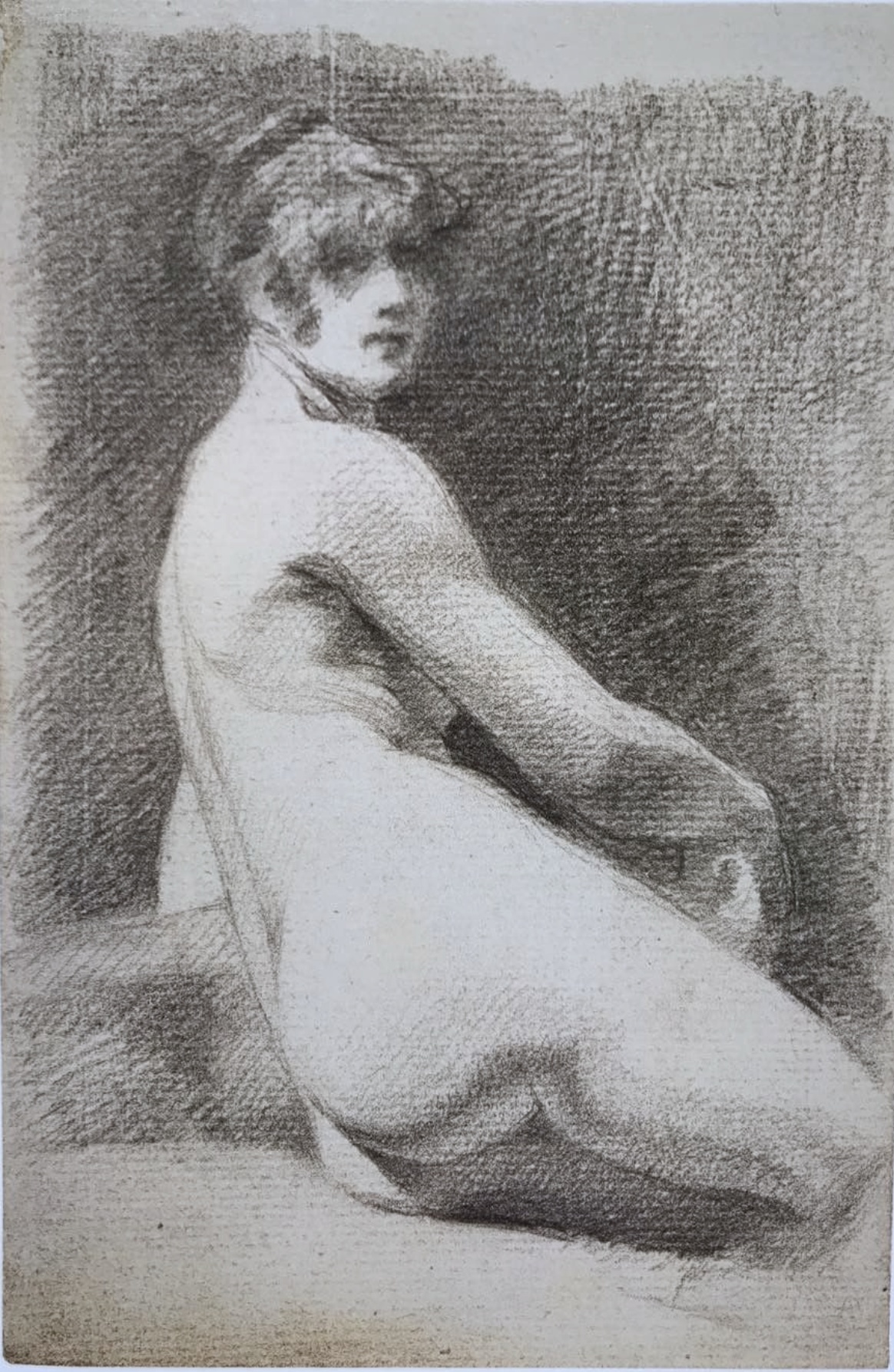 Constable's fame as a landscape painter has inevitably overshadowed his lifelong interest in the human figure. The copying of casts, the study of anatomy and eventually drawing and painting from the live model underlay his training at the Royal Academy Schools. To secure admittance in 1799 as a probationer he was required to draw from casts after the Antique under the supervision of the sculptor Joseph Wilton , then Keeper of the Schools, and having qualified as a student he was enrolled in the Life Schools and allowed to draw from the living model in June 1800.

In 1804, Henry Fuseli was appointed Keeper, and his impact as a teacher who believed in the fundamental importance of life drawing was to be felt by a whole generation of artists including Wilkie, Mulready, Haydon and Constable. Throughout his career Constable continued to attend the Life Schools regularly. The diarist and keen observer of the contemporary art scene,  Joseph Farington, noted on 16 November 1807 that 'Constable attends the Life Academy every evening', while in the summer and autumn of the following year David Wilkie recorded Constable's presence on several occasions, both painting and drawing from the life. Further studies dated 1811 and 1820 form reference points for undated sheets.

In January 1831 Constable was himself appointed as Visitor to the Life Class, again in 1832 and finally just before his death in 1837. He devoted much attention to these classes, setting the models in a variety of poses, some of which were inspired by Michelangelo's Last Judgement and by Raphael's Stanza della Segnatura, including the figure of Eve in the Garden of Eden, a setting which Constable - as befitted a landscapist - attempted to recreate for the benefit of his students with tubs of plants and foliage, somewhat to his own amusement.

A  number of Constable's life studies are of considerable beauty. As his friend and biographer C.R. Leslie noted, 'I have seen ... many chalk drawings and paintings from the living model, all of which have great breadth of light and shade'. This sheet is immensely subtle in the carefully considered contrast between the dark background and the whiteness of the torso, while the model's glance towards the spectator and the diminutive size of the sheet add a special sense of intimacy. The model for this study seems to be the same girl as in several other drawings, including a group that descended in Constable's family, now in the collection at the Minories , Colchester (Reynolds 20.61-5), two of which are dated 1820; she was presumably a regular model at the Academy's Life Class. Graham Reynolds suggested that the present drawing may therefore also have been made in 1820, when Henry Howard, Secretary of the Academy, was Visitor to the Life Class in February and August , but also notes that it could have been drawn some years earlier.