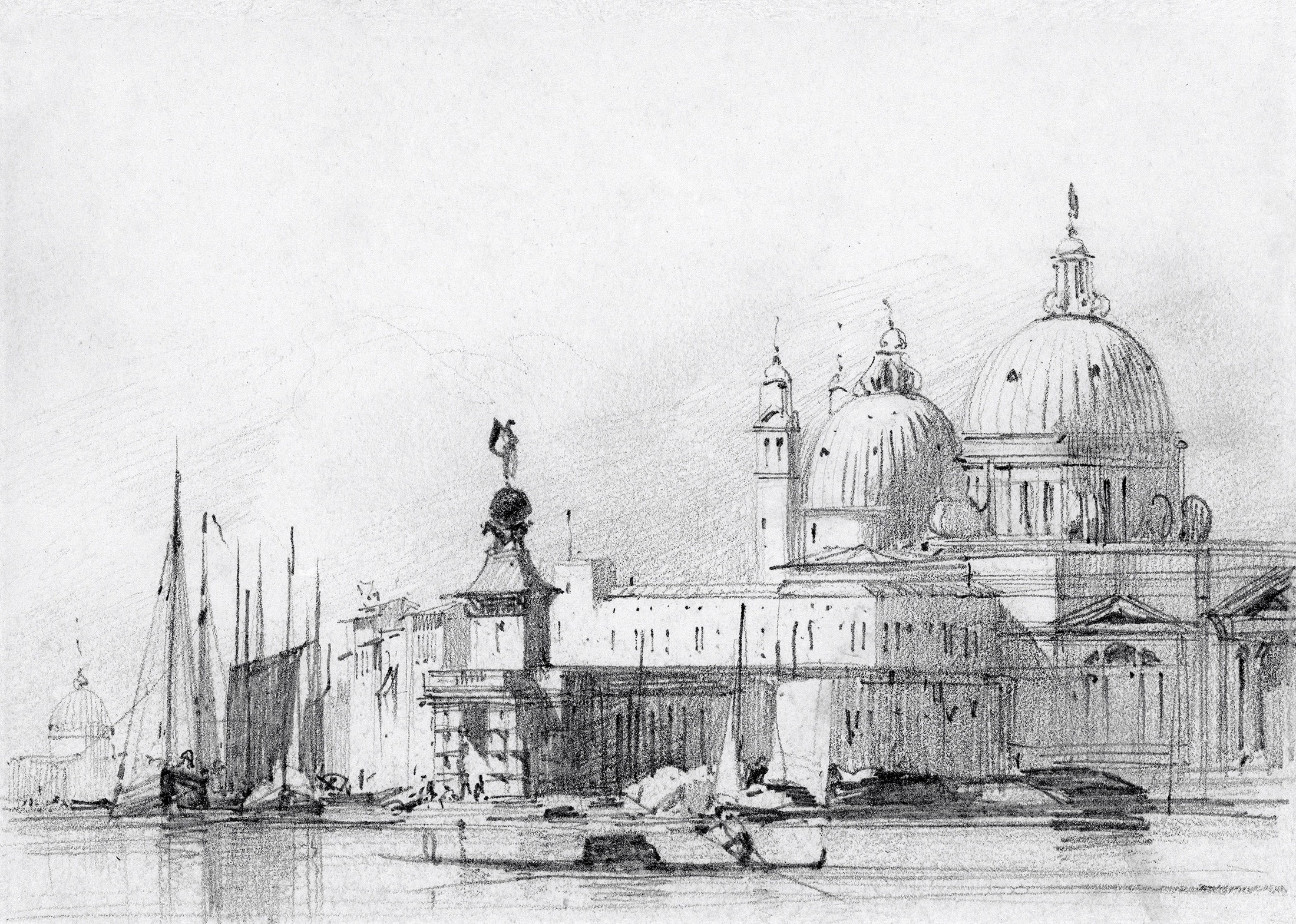 To be included by Patrick Noon in a forthcoming supplement to the R.P. Bonington catalogue raisonné

In this exquisite drawing, Bonington delicately depicts the Punta della Dogana, which is the eastern tip of the sestiere (literally a 'sixth' of the city) of Dorsoduro where the Grand Canal meets the Giudecca Canal.

This triangular area includes the great landmark church of Santa Maria della Salute, whose domes can be seen rising above the boats and buildings to the right of the composition, the Dogana da Mar (Customs House), the Patriarchal Seminary of Venice. Crowning the low tower of the Dogana da Mar is a bronze sculpture by Bernardo Falcone, (c.1630-1690) of male nudes supporting a gilded globe, surmounted by an allegorical figure of Fortune holding a sail, an appropriate symbol for the customs house of a state whose wealth depended for much of its history on maritime trade.

On 4 April 1826 Bonington, and Delacroix's childhood friend Baron Charles Rivet, left Paris for a three-month tour of northern Italy. Delacroix was meant to be of the party but declined at the last moment owing to the extreme pressure of work. The two men visited Milan, Brescia, Lake Garda and Verona at a hurried pace because Bonington, according to Rivet, "thought only of Venice". To the Romantics, the city, which had been in rapid decline since the Austrian occupation, was a masterpiece that nature was irrevocably dissolving before their eyes. Bonington felt the need to fully record a city that he might never see again.

Whilst in Venice, Bonington sketched incessantly in pencil, watercolour, and oils. These sketches provided subject matter for much of his finished art in the remaining months of his life.

Venice would eventually supplant Rome as the centre for artistic pilgrimages, but it is important to note that Bonington was one of the first artists to paint its cityscape and monuments for French audiences. François-René de Chateaubriand, among others, commented on Bonington's depictions of this great city.

In a letter of 1861 to the art historian Théophile Thoré, Eugene Delacroix (1798-1863), Bonignton's great friend and admirer, highlighted that aspect of Bonington's talent that he most admired:

" ……..no one in this modern school, and perhaps even before, has possessed that lightness of touch which makes his works a type of diamond that flatters and ravishes the eye, independent of any subject and any imitation."